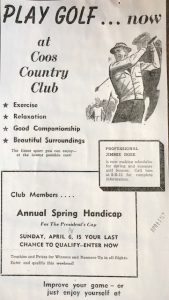 As the first golf course on the Southern Oregon Coast, Coos Country Club, as it was formerly known, was founded in February 1923 by I.R. Tower. “Ike” brought the game from Grays Harbor, Washington where he made trips to court the girl he married. At its first meeting the board, including Tower, Claude Nasburg, W.J. Conrad and A.E. Adelsperger, voted to purchase the Watson Ranch property for $8,000.

The original nine holes were designed by H. Chandler Egan. He was a prominent amateur golfer, winning the NCAA in 1902, and the U.S. Amateur in 1904 and 1905. Egan won the Western Amateur four times, and the Pacific Northwest Amateur five times from 1915 to 1932. Other Oregon courses he designed include Eugene Country Club (1912), Riverside, Eastmoreland, Oswego Lake, Tualatin, Rogue Valley and Hood River. He redesigned Pebble Beach in 1928, specifically for the 1929 U.S. Amateur, where he reached the semi-finals at age 45.

The back nine, opening on May 1, 1998 for play, was designed by Bill Robinson.  In 2006 the golf course and surrounding 60 acres were sold to Watson Ranch Development, LLC who continued to add features and make improvements to the course.

In 2017, Andre and Karissa Liloc bought the course, renaming it Coos Golf Club with a nod to both the past and future of the course.  Today, Coos Golf Club continues to sere the Coos Bay, North Bend and Bandon area, providing great golf for locals and visitors.  The staff of Coos Golf Club is proud to be part of the community and looks forward to welcoming you.